/ COMPUTING / Who Invented the Computer Mouse?

The first computer mouse was invented in 1964 by Dr. Douglas C Engelbart.  He was working in collaboration with his colleague Bill English at Stanford Research Institute.  The mouse changed how the user accessed a computer from a complex machine that only a computer scientist could operate to a user-friendly interface which almost anybody could use.  The mouse got its name because of the long wire which attached it to the computer from its rear which gave it the appearance of a mouse. 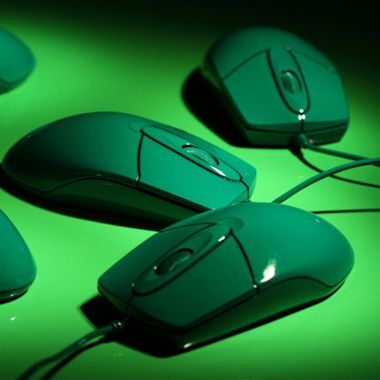 The first mouse was made of wood, with a circuit board, two metal wheels which remained in contact with the surface it was being used on and a button.  It was a hand-held ‘pointing’ device which allowed the user to control a ‘pointer’ on the computer screen.  It was patented on November 17th 1970 and was made commercially available in 1973.  Interestingly, Engelbart never received any royalties for the ‘mouse’ future sales because the patent was actually registered to his employer SRI – Stanford Research Institute.

It wasn’t until 8 years later in 1972 that the mouse had its’ first upgrade.  Bill English developed the design to create a ‘ball-mouse’.  The ball replaced the wheels and enabled the device to glide easily in any direction.  The downside to the ball was that it frequently became dirty and clogged up with dust which had to be regularly cleaned out to keep it running smoothly.  This downside led to the next development, another 8 years later  in 1980 when the optical mouse was invented.  This was eventually patented in 1988 by its inventors Lisa Williams and Robert Cherry. It is still the main technology in use today.

Amongst his many further achievements throughout the rest of his life, Engelbart was awarded the Lemelson-Mit prize of $500,000 for his inventions and innovations in 1997 and in 1998 he was included in the National Inventors Hall Of Fame.